A cake stand, displaying curious things: slices of cake (unsurprising), alongside an upturned nose, a sleeping swan and other paraphernalia, whilst a human-like form rests above it, a creature escaping from its mouth like an exorcism. In another painting, two globular beings hold seemingly intense eye contact, a spoon extending from the mouth of the larger, salmon pink being, a pure white light shining in the background. Sounding like the descriptions of strange fever-dreams, the content of both Stephenson and Pailthorpe’s fantastical paintings is playful, bizarre and disordered. 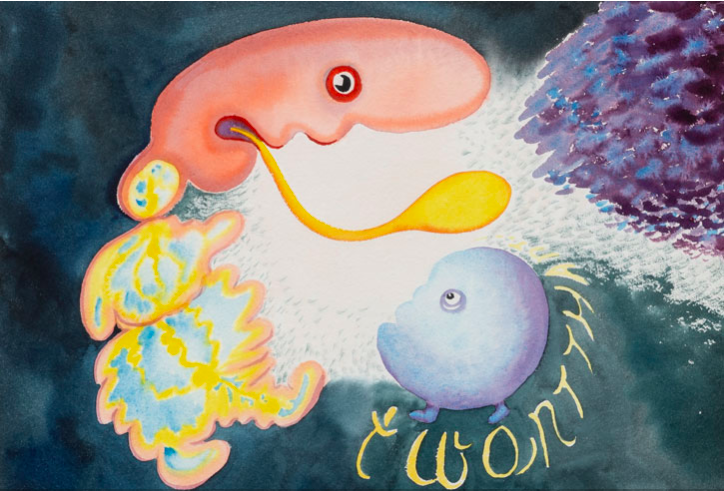 Born over a century apart, both Mary Stephenson and Grace Pailthorpe bring to life the mysterious, sometimes unarticulable, logic of dreams. Pailthorpe was a controversial figure in the Surrealist movement, having been expelled from the group in 1940 due to her refusal to heed the group’s cohesive doctrines. Trained originally in psychoanalysis and psychiatry, Pailthorpe latterly turned to painting and committed to portraying what loiters in the depths of our subconscious. Typically depicting organic matter: bodily fluids, umbilical cords, fetal forms, Pailthorpe’s works typically focus on biology and juvenile psychological processes. Stephenson, a contemporary artist currently studying at the Royal Academy Schools, also adopts a Surrealist language in her work. When regarding Stephenson’s works, one encounters a sad cucumber, wine bottles as shoes, a face melted into a napkin. Undoubtedly, in both artists’ work, the dream world is abundant with intrigue. 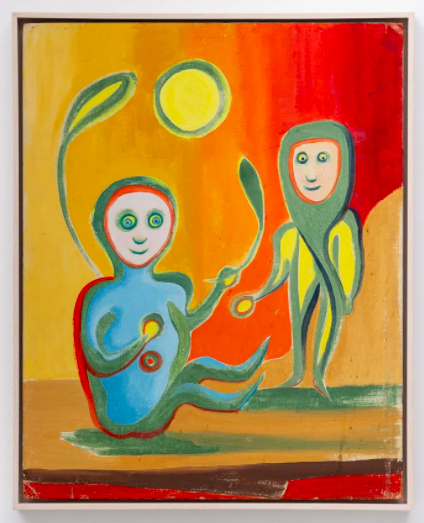 Anxieties awaken in Pailthorpe’s works as the curious imagery of the unconscious is articulated on her canvases. The titles of her paintings are mere dates, time stamps, in reference to the night the dream was had. More abstract in form, there is a palpable naiveté present in Pailthorpe’s work. Indeed, “regression to childhood and even, in Pailthorpe’s case, to the womb, is of central concern to both artists”, as Chloe Nahum points out in the accompanying Curator’s text. Living under the firm control of the Plymouth Brethren church’s strict commandments, Pailthorpe’s work is a childish, belated substitute for having lived her formative years in abject terror.

Much like psychoanalysts seeking to decode the latent meanings lurking in dreams, one endeavours to make sense of the wondrously bizarre content of Stephenson’s canvases. In Blue Jug, bodies fizz and dissolve like bubbles in a glass of champagne. The scene, appearing to be taking place at the bottom of an endless pool, submerged underwater, lurks in obscurity between a dream and a nightmare.  Indeed, Stephenson is concerned with how the unconscious can obscure even the waking world, both obfuscating and revealing physical reality. Stephenson depicts the ways our thoughts morph and meld into comprehension.

As a whole, the vibrant mustard yellows and fiery reds used by both artists create cohesion. A central, cerulean blue wall in the exhibition space provides a rich contrast to these vivid hues. Indeed, as Chloe Nahum aptly writes, in this exhibition “the unconscious rules the roost, and does as it pleases with paint.” Not only is the content equally weird, but also equally vibrant. Simultaneously disturbing and delightful, ‘Fertile Spoon’ revels in the strange.

‘Fertile Spoon’ is on display in Bosse & Baum’s Peckham gallery until 22nd May 2021.